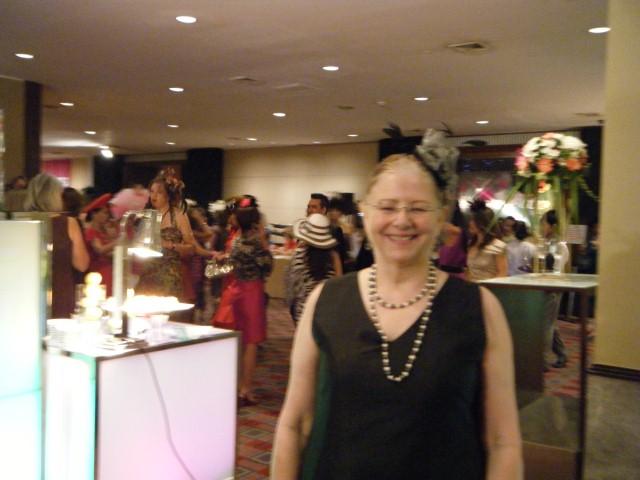 Today was the Melbourne Cup Retrospective. As all you Race Meet aficionados know the Melbourne Cup takes place in Melbourne Australia every November and from what I gather is somewhat like Ascot with a bit of The Grand National thrown in. Anyway those Aussies manage to celebrate the event almost where ever they happen to congregate in the world and one of the biggest of those celebrations takes place in Bangkok every November: I was privileged to attend 3 of them while I was living here. Unfortunately (or fortunately for me) last November’s event was postponed due to the flooding in and around Bangkok and it was decided to hold a party of similar magnitude in February. As they couldn’t screen live footage of the actual race they did a digital rerun of all the winners from the last hundred years of the race thus we were able to have the sweepstakes. I had a winner with a 100bht bet on the horse who came first I got 500bht back (it helped towards the 2,000bht I spent on bets). All the money raised by this extravagant get together goes towards various charities and this year it is going to help flood victims. The event attracts mostly women who get all dolled up in fancy gear to try and win prizes for their outfits. All kinds appear some outrageous and some elegant with everything in between always including a hat of course. I made a fascinator from scratch which I was very proud of. Anyway the party starts at 9:30am with champagne and canapes, then proceeds to lunch and more wine, eventually finishing around 3pm at the venue but continuing at another bar/restaurant until the last one is standing!!!! I was not able to make it after 7pm, my jet lag was catching up with me and I was in bed by 8:30pm. A great day none the less.